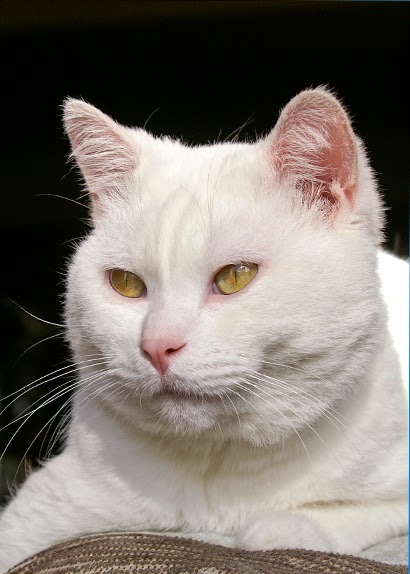 Yes, my name is Bentley, I lived in a nice house. But one day I was taken to this strange place, put inside a cage. That was the last I saw of my family.

The cat in the cage next to mine, told me his family had moved and not taken him with them. I wonder if that is what happened to me.

I was taken to another building where they said I would be tutored, or did they say neutered. Then I was taken back to my cage. Where I sat for a long time. Some of the cats found families, others that stayed too long moved back from the cage door, moving further and further away from being friendly.

Then one day a man looked into my cage. He smiled, he seemed nice so I tried to play with him.  Then a lady joined him and looked at me and said, "Hi Snowball."

I meowed and said, "My name is Bentley! "

My friend in the next cage said to act nice and maybe they will take you home. Well being nice was
easy because I am nice.

I am going with them!

Not sure how things will work out, so come back to see more posts.

Something To Think About!


In the May 11th. issue of Parade the following article appeared concerning renewable energy sources such as wind turbines and wave motion. It raises questions I have not heard before. Shouldn't these questions also be considered in any discussion of conventional vs. renewable sources? It seems no source is without its own set of problems.

Yes, and the more widespread they become, the more these changes will go beyond the
immediate area. Some effects, such as ground warming and drying for miles around, are
already known, but cumulative effects on the weather - especially if wind farming grows
significantly -- are unpredictable.

One point to note is that while wind farms are a source of renewable energy, this doesn’t
mean they - and other forms of renewable energy, for that matter - don’t cause change. Even improved engineering of the turbines ( to reduce turbulence, etc.) cannot eliminate the fact that
the machines remove energy from the wind, and this will have an impact on the weather and ultimately the climate.


Marilyn Vos Savant (born August 11, 1946) is an American magazine columnist, author, lecturer, and playwright who rose to fame through her former listing in the Guinness Book of World Records under "Highest IQ." Since 1986 she has written "Ask Marilyn," a Parade magazine Sunday column where she solves puzzles and answers questions on various subjects.


Powered By Handmadeology
Posted by Celtic Cat at 10:27 AM No comments:

Soft as a whisper! Christmas in July Treasury Blitz - Not a member? Join us at https://www.etsy.com/teams/12798/christmas-in-july


Powered By Handmadeology
Posted by Celtic Cat at 1:15 PM No comments:

'let yourself loose ☼' by Umbrellafant


Powered By Handmadeology
Posted by Celtic Cat at 1:14 PM 4 comments: