A question on an Etsy Team got me thinking. What would I do if I had a week off and could do a road trip. Well my answer was a trip along Lake Michigan would be my choice. So off DH and I went. We only had 2 things going out that we wanted to do; photograph a picture barn I was told about and stop at the Chocolate Garden.

On our first day we accomplished both. 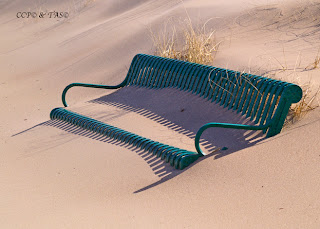 For winter shooting I take besides a winter coat, a vest, wristies, gloves, ear covers, a hat, and fleece socks, besides the usual camera gear. We haven't had much snow, at least not where I live, and it has also been warm so we didn't know what to expect.

We started in Michigan City, Indiana. The vest was the first to go, it was in the sixties. Nice and warm, but the wind was vicious. I walked out to the the old lighthouse along the beach, had to look for a place I could get up the sand dune to access the pier. Even though there were fishermen on the pier, I stayed back where it was safe. There are all kinds of warnings about going out during high winds that create waves that can knock you into the icy water. 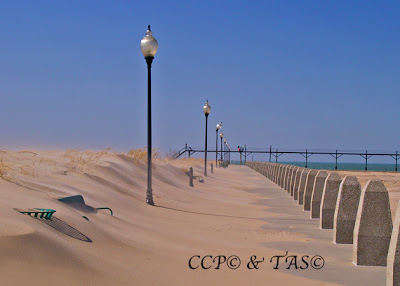 To save time I decided to walk back along the boardwalk. Big mistake. The sand was reclaiming the walkway. I had to place my camera under my jacket, turn away from the wind and hope for the best. I was being sandblasted. It took me a long time to get all the sand out of my hair.

From there we headed north to St. Joesph.